Nosework is a new sport involving your dog and its nose. The sport was begun in the US by professional detection dog handlers and trainers Ron Gaunt, Amy Herot and Jill Marie O’Brien. Having trained dogs for drug detection etc, they decided that this would also make an excellent sport for pet dogs. The National Association of Canine Scent Work (NACSW) is the oldest body of nosework having been established in the mid-2000s in the US.

Here in Australia we have K9 Nose Time run by Marion Brand. Marion trained extensively in the US in order to bring this wonderful new sport to Australia. She returned to the US 6 times over two years to receive intensive training from the original founders of the sport and received her CNW1 certified Nose Work Instructor status. Marion has since trained others and she and her fellow instructors now run courses in Sydney as well as beginning to establish this sport interstate. 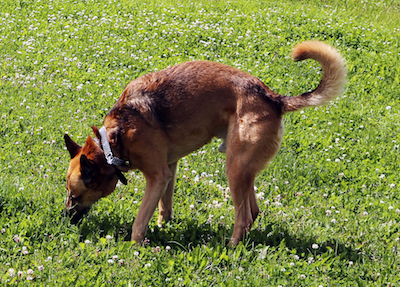 Australian Caninie Scent Work (ACSW) is the first sanctioning organization for the sport of K9 Nosework in Australia. It is independent of the NACSW. The current plan of the ACSW is to use law enforcement and private sector K9 Detection professionals to judge many of the K9 Nose Work trials. Competitors benefit from the judges’ expertise and understanding of scent work and searching.

What does this new sport consist of?

The training begins with learning to hunt for food. Actually there isn’t much learning involved since most dogs love food and finding it isn’t usually much of a problem. The wonderful part is that the handler does very little and it is all in the dog’s court. In fact we are told to “leave your obedience training at home”. The dog gets to eat the food it finds and we reward it by dropping more food for finding the original food…you get the idea! Is it any wonder that dogs love this?

After two 6-week courses in finding food in various situations (my Pug Lucy excelled in a car search. She realized immediately that the food was all over the outside of the car hidden in various places and she was very methodical, succeeding in finding all of it!), the course then moves on to scents. The dogs learn to find three target scents; Birch, Anise and Clove, so no, no drugs for our dogs but loads of fun nonetheless. We reward them finding the scent with food – even in a Trial!

What dogs are suitable for this sport?

The short answer is ALL OF THEM. For dogs with limitations, K9 Nosework can be played for fun and in many cases for therapy too. Elderly or disabled dogs can get much needed mental exercise (a

friend of mine had to retire her dog from obedience because of severe arthritis in her shoulder. This dog is now excelling in nosework). Nosework is also very good for fearful dogs since they forget all about their fear when engaged in the sport and thus can build confidence to get out and explore the world. Reactive dogs can also do this sport since a large part of the training setting is that dogs do this individually but know that other dogs are in the vicinity. I have seen a highly strung Malinois forget everything but his nose and really enjoy the class.

Why are dogs so good at this?

We humans live in a visual world and forget that dogs live in a scent- filled world. In fact, I refer to their world as a technicolour world of smells. A dog’s nose not only dominates its face but its brain as well. In fact, a dog relies on its sense of smell to interpret its world in much the same way that people depend on their sight.

Dogs were born to sniff. To get an idea of this lets have a look at our mutual scent organs. A microscopic view of this organ reveals a thick, spongy membrane that contains most of the scent- detecting cells as well as nerves that transport information to the brain. Though the size of this surface varies, even flat-faced dogs can detect smells far better than people. The percentage of the dog’s brain that is devoted to analysing smells is actually 40 times better than humans.

It has been estimated that dogs can identify smells somewhere between 1000 and 10,000 better than us. The number of scent receptors in a human is 5 million, in a Dachshund 125 million, in a Fox Terrier 147 million, a Beagle 225 million, a German Shepherd 225 million and bloodhound 300 million! I’m told that my Pug Lucy has less “real estate” than other breeds but she certainly has way more than my measly 5 million.

So give this sport a go. There will be nothing but fun for you and your dog.

WHERE TO FIND US